How Chips are Made 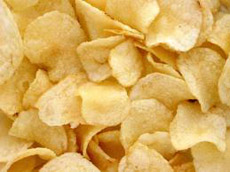 Potato chips were invented about 150 years ago in Saratoga Springs, New York by a chef that sliced potatoes so thin you could see right through them.

Now, years later, potato chips are munched on in many countries around the globe. A regular potato chip factory makes thousands of chips each hour.  Below is a little description of how this happens.